Gill and I were contacted by Richmond Park and asked if we could have a look at an oak tree which had become dangerous and had to be felled. There was a wild honeybee colony in it which was now at ground level and so they had put a barrier around it to prevent people getting too near. Would we be able to remove it? We were sceptical but said we would have a look.
We were presented with a large length of tree trunk with a hollow core leaving a smallish hole at one end with the odd bee flying in or out. We were told that they had been pretty busy on warm sunny days but it was cold and overcast yesterday when we went. We peered through the hole and saw several honeycombs.
We found that a lot of the material surrounding the hole was loose and easily removable so that I was eventually able to reach in at full arms length and remove the combs one by one. The colony was not very large but they had a good store of honey and we ended up with very dirty and sticky bee suits. We put the combs with brood and some stores in a hive and were lucky enough to see the Queen who looks nice – large and plump. We took them to a neighbour’s garden.
We went back the next day and collected most (we hope) that we had left behind. Inevitably we could not collect them all as some were tucked away in odd crevices. We returned again a day later and there were a few stragglers flying.
We hope they will be able to survive their ordeal but we did the best we could.
Anyway it was a bit of fun and nice to get away from the usual coronavirus preoccupations. We were amused to think that we were so pleased to be able to do something we regard as normal and which very few others would. 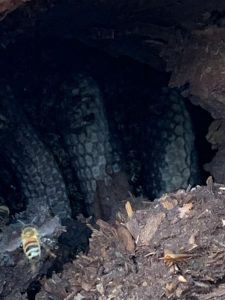 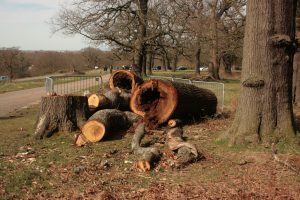 2 days later. The nest had been in the log on the top 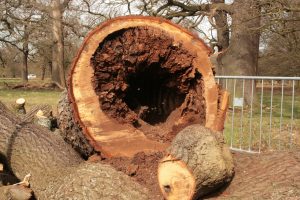 You can see a few lost souls flying and can just see where the tops of the combs were originally fixed at the end of the cavity.